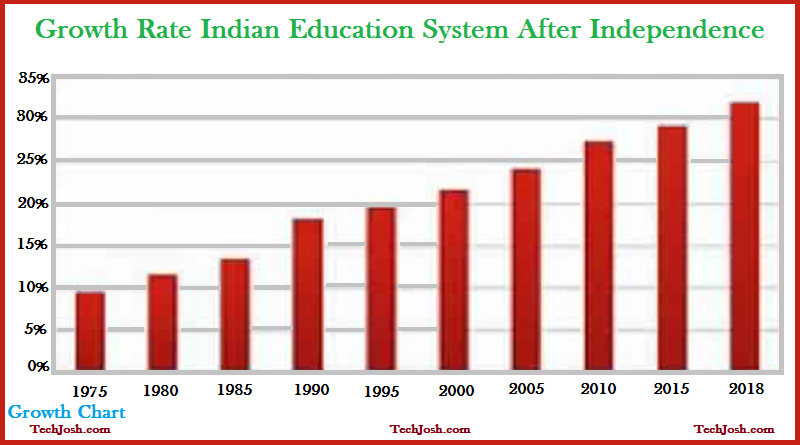 Indian Education System as a result of the widespread illiteracy, India has successfully adapted its education system to global standards. We have made great progress in education in the 70 years since independence. The picture in education was quite different in 1947 from now. India has come a long way in terms of literacy rates in general with more universities and educational institutions. In 2001, the literacy rate was 64.8%, and this ratio rises to 73% in 2011. In 1951, it was 18.33%. At present, India’s higher education system is the largest in the world, hosting more than 70 million students in less than two decades.

Indian Education System After Independence, which was exclusive to the elite, is now accessible to a large segment of society. The Government has set up various education committees to address the challenges of education, recommend comprehensive education policies and improve the education system in India.

The Central Advisory Board of India decided to establish two committees, one responsible for university education and the other for secondary education.

The first committee for the most important education in independent India was the University Education Committee of 1948, Radhakrishnan, to report on the status of Indian university education and propose improvements and extensions. Desirable to adapt to the future and future requirements of the nation.

The committee also aimed to establish universities that provide knowledge and wisdom for the development of the overall student personality. This report suggested rebuilding the education system in accordance with the Indian Constitution.

The recommendations of the Mudaliar Committee occupy a very important place in the development of secondary education in India Independent. He stressed the need to train Indians in a democratic way of life. Some reforms have been introduced into Indian education system on the basis of reports and recommendations, for example, the introduction of higher secondary education curricula with a three-year course and the opening of vocational schools and colleges. More and more techniques. Education has become the responsibility of the state and central governments.

The Mudaliar Committee followed the appointment of the Education Commission of India headed by D. Kothari, popularly known as the Kothari Committee. He has been mandated to deal with all aspects and sectors of education and to advise the Government on the development of the Indian education system.

In accordance with the recommendations of this Committee, the 1968 National Education Policy was formulated. The most important development in the improvement of the education sector was national policy. Of education in 1968. Education perspectives have been directed to all sectors of society to achieve the goal of harmony and integration. The use of regional languages in secondary schools was encouraged to establish an effective relationship between teachers and pupils. Excellence was given to Indians as a means of education in schools.

There was a sense that education had the potential to act as a popular tool for social, economic and political change. Educational objectives are rather linked to long-term national aspirations. In addition, the government has established committees to study the development of modern-day education, especially since independence, has come to the conclusion that Indian education requires radical reconstruction, almost a revolution. Goals and deal with the various problems facing the country.

The 1979 National Education Policy Project proposed the development of an education system that not only helps people improve their knowledge but also their academic skills. There has been a paradigm shift in government methodology.

The main aim was to educate students about ethics and ethics so they can develop a good personality and become deserving citizens. It was suggested that a good educational system should be developed to promote constitutional values.

The National Education Policy of 1986 emphasized scholarships for the poor, adult education, reorientation of the system to promote gender equality, employment of teachers from oppressed groups, and disabled persons. Physical and mental health and areas requiring special attention. Special and also the development of new schools and universities.
All these political initiatives after independence have produced important results in all areas, such as school enrollment, increased spending on education, growth in literacy rates, the universalization of education, etc.

The education system has increased significantly since independence. According to official data published by the Ministry of Human Resources Development, spending on education through education and other departments was only 64.46 million rupees in 1951-1952, barely 0.64% of gross domestic product which totaled more than 4.65.000 crore rupees in 2013-2014 Which was 4.13% of GDP.

India achieved the highest growth rate of 15.52% in literacy in 1991 thanks to the implementation of the new education policy of 1986, which provided the best chance of obtaining 100% literacy in the country. Nearly 360,000 students enrolled in colleges and universities in 1951-1952. This number has increased significantly to almost 4 million in 1990-1991. Registration continued to increase steadily.

India’s education sector is the fastest growing in the coming years, with India having the world’s third largest population and the second largest talent pool at the time. End of 2020.

After the creation of a series of commissions and committees, the Indian Education System After Independence was in the process of transforming itself, with an emphasis on quality improvement. He intended to develop moral values among students and make education closer to life. But what is necessary is a courageous effort designed by all stakeholders: governments, administrators, teachers, students and the community to make education more useful and useful. However, in the absence of such power, education in India was not sufficient to serve as a catalyst for human social development.

It also emphasized the universality of primary education, the eradication of illiteracy and the development of skills in the 15 to 35 year age group, the nationalization of education and hand training. Are essential to development needs, to improve quality at all levels and scientific and technological research. Policy implementation should be reviewed every five years.

The Sarva Shiksha Abhiyan government was launched in 2001 to provide education for children aged 6 to 14 years. Prior to that, he launched an effective initiative, the province-supported education program, which has led to an increase in the number of schools throughout the country. In an attempt to attract children to school, especially in rural areas, the government also began implementing a midday meal program in 1995.
Subsequently, the Planning Commission of India stressed that the education system should be beneficial to the UEE. The provision of adequate infrastructure and the number of qualified staff was verified and disseminated in 2008 through local Panchayat. The central government has developed and supported it

The government has allocated about Rs17,000 (US $ 2.55 billion) for training, job creation and livelihoods for millions of young people, to strengthen the mission’s skills in India. In addition, this represents an increase of more than 8% in education budget allocations compared to the recent budget. However, when one considers the implementation of the Seventh Payments Committee with an increase in salary burden, the education budget may be the same as last year. This year, the Minister of Finance allocated 3,711% to the education sector compared to 3,653% of the previous budget.

It also approved a historical record of more than 4,000 postgraduate medical courses (GPs) to be added to many colleges and medical hospitals for the 2017-2018 academic year. The Council also approved a proposal to open the new 50 Kendriya Vidyalayas (KV) in the civil / defense country that requires An investment of Rs. Crore 1160 (180110000 US $).

In addition, the Government of India and the World Bank signed a loan from the International Development Association (IDA) for the Third Technical Education Improvement Program (TEQIP III), aimed at improving efficiency, quality, and equity in engineering. Education in various interesting countries.

While the Sarva Sekha Albheim (SSA) County Primary Education Program (DPEP), the Back Room Plan (MMSD), the Teacher Education Plan (TES) scheme and the Castorba Gandhi Balika Vidyalaya (KGBVS) have worked well in the country and are still working well. Many states. The number of children attracted by primary education has grown rapidly, although the number of dropouts remains high. These plans undoubtedly responded to the enormous needs of millions of children in need of primary education. Primary education is now available for children in villages with a diameter of 1 to 2 km.

The Right to Early Childhood Education Act and the Free or Right to Education Act (RTE) is a federal law issued in India August 4, 2009, which describes the conditions of the importance of free and compulsory education for children aged 6 to 14 in India under Article 21 The Indian Constitution. India became one of 135 countries to make education a basic right for all children when the law came into force on April 1, 2010.

The law makes education a basic right for every child between the ages of 6 and 14 and sets minimum standards in primary schools. It requires that all private schools maintain 25% of the seats allocated to children (to be paid by the State under the Public-Private Partnership Plan).

Other government initiatives are being proposed and adopted to stimulate the growth of the distance learning market, as well as to focus on new educational techniques, such as e-learning and e-learning.

The education sector has seen a series of reforms and improved fiscal expenditures in recent years, which could turn the nation into a knowledge paradise. Given that human resources play an increasingly important role in the overall development of the country, the development of educational infrastructure is expected to remain the main objective of this decade. In this scenario, investment in infrastructure in the education sector is expected to increase significantly in the current decade.

There are about 650 provinces in India and each province has about 2 million people, equivalent to the total population of some Western countries. In fact, some countries in India have a population that exceeds the common population in countries such as Sweden, Switzerland, Norway, Belgium, and the Netherlands. Therefore, our planning and educational priorities must be very different from those of Western countries. But it is important that India does its best to provide the growing number of children with the necessary infrastructure for pre-primary education and primary education.

The Battle between Flutter and React Native – Which one is...